Honor for the fallen: Memorial Day marked at future site of veterans’ park 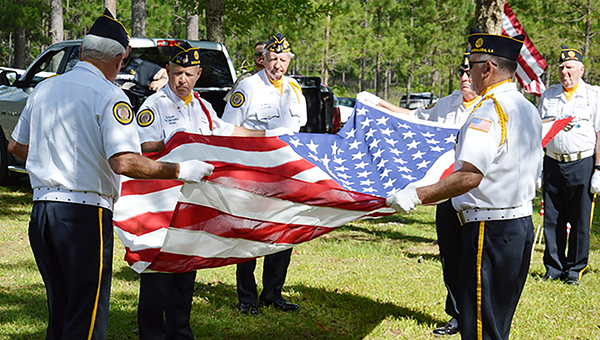 Members of the American Legion Post 24 demonstrate the proper way to fold the American flag during Monday’s Memorial Ceremony at the future site of the Our Veterans Memorial Park. (Courtesy photo by Joe Culpepper)

The Washington Parish Republican Parish Executive Committee and the committee for the Our Veterans Memorial Park hosted a Memorial Day celebration on Monday at 9 a.m.

The ceremony, titled “A Tribute to Our Veterans,” was held at the future site of the Our Veterans Memorial Park, located at 54042 Dollar Road.

Brent Jones provided the welcome and Bro. Scott Breland led the opening prayer, followed by the singing of the national anthem by Larry Miller.

After the pledge of allegiance was recited, there was a special introduction for all veterans in attendance.

Norman “Joey” Roberts then spoke about Gold Star Families, which are families where a family member was killed in action during military service in a time of conflict. Roberts is a member of such a family, and shared the story of his daughter who gave her life in service.

The ceremony concluded with everyone in attendance singing “America — My Country ‘Tis of Thee.”

Our Veterans Memorial Park site is a 3.8-acre tract of land in Washington Parish, located at 54042 Dollar Road at Highway 10 in Franklinton. The creation of this project was generated from the highly successful and supportive fund balance from “The Wall That Heals” in November of 2018. Committee members meet monthly to push forward with plans for the construction.

Donations should be submitted to “P.O. Box 326 Franklinton, LA 70438.” Checks are to be made payable to “Our Veterans Memorial Park.”

Committee members of “Our Veterans Memorial Park” include Joey Roberts as President, Phillipp Bedwell as Vice President, Joannie Miller as Secretary, Tammy Magruder as Treasurer, State Sen. Beth Mizell, Matt Parker and Lynette Sharp. Penny Jones is on the Fundraising Committee and Robby Stringfield is on the Construction Committee.