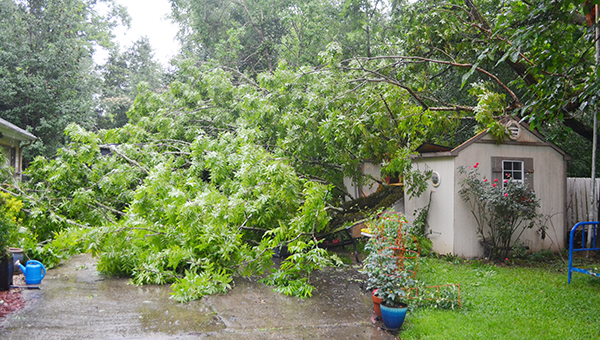 A Bogalusa homeowner was scared Wednesday afternoon when a tree fell on her shed during a rain storm. She was not injured. (Daily News photo by Justin Schuver)

The heavy rain that came through Bogalusa on Wednesday afternoon gave quite a scare to a local homeowner.

E. Ann Rhymes, who lives at 1250 West Ninth St. in Bogalusa, said that she had gone inside her house to “make a banana split” when she heard a loud crashing sound.

“I thought it was thunder at first,” she said.

When Rhymes went outside, she saw that a large tree had fallen into her yard, crushing the roof of a storage shed and giving the building major damage. The branches of the tree also partially blocked the door of the garage where her vehicle was parked inside.

Thankfully, she said it did not appear that the tree damaged the house itself.

“That tells me maybe I shouldn’t make another banana split,” Rhymes said, with a soft chuckle.

She noted that it was definitely a blessing the tree didn’t hit her home, and that she wasn’t in the shed when it happened.

“It definitely scared me, though,” Rhymes added.