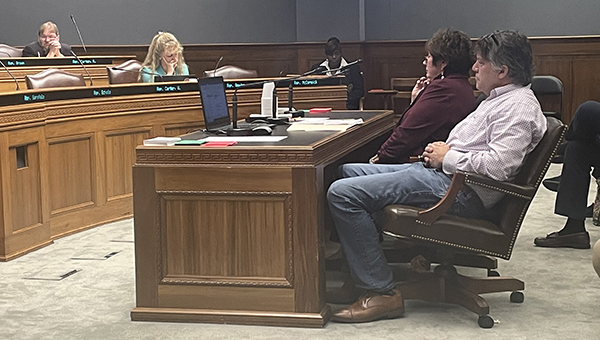 Rep. Kathy Edmonston and witness Christopher Alexander testified to a House committee about her bill to ban discrimination over vaccination status.

On Monday, the House Committee on Civil Law and Procedure advanced a bill that would prohibit discrimination over vaccination or immunity status.

Edmonston’s bill originally applied to all discrimination statutes, including those related to employment, education, lending, health care and insurance. It was amended in committee to not apply to discrimination in housing rental and sales.

The bill passed 9-4 with all of the Republicans in favor and four of the committee’s Democrats opposed.

“Discrimination, as we all know, is not a Louisiana value,” Edmonston said. “It has a negative effect on our economy and our people young and old. They’ll be looking elsewhere for jobs, leaving our state. They believe in equal access for all under the law.”

“We believe whether to vaccinate or not should be a personal choice,” Edmonston, who has publicly questioned the safety and efficacy of vaccines, said. “And those who choose to depend on their natural immunity should not be coerced, manipulated, threatened with job loss, experience financial hardship or be shamed into receiving a vaccination.”

While the bill applies to all vaccines, most of the discussion centered around COVID-19 vaccines.

State Rep. Beryl Amedee, R-Houma, who also has criticized vaccine mandates, said that she had heard from constituents who have been hospitalized with COVID and subsequently had their insurers refuse to cover the expenses due to not being vaccinated. Edmonston said that her bill would prevent that from happening.

Several people who claimed to have been discriminated against based on vaccine status testified in support of the bill.

Dr. Kathy Willis said she was fired from her position in a healthcare setting for refusing to get the vaccine or fill out an exemption form.

Tommy Waller, a former U.S. Marines officer, said that his refusal to take the vaccine precluded him from military service and cost him his military medical benefits.

The U.S. military requires vaccinations to help keep units ready to deploy on short notice. Fewer than 12,000 of the nation’s 1.6 million active-duty and reserve personnel have refused COVID vaccines. About 3,800 of them have been removed from service.

State Rep. Robby Carter, D-Amite, who is immunocompromised due to a kidney transplant, opposed Edmonston’s bill. He asked why he should be forced to let unvaccinated people into his law office.

Fiorella Trapani, an advocate with Health Freedom Louisiana, an anti-vaccine advocacy group, told Carter it was his opinion that someone who has not been vaccinated poses a threat to his health.

Like most vaccines, the COVID-19 vaccines work best when as many people as possible are vaccinated, infectious diseases experts say. About 60 percent of Louisiana residents have received at least one vaccine dose, which is one of the lowest vaccination rates in the nation.

“There’s not a lot a person could do about their race or their sex,” Jenkins said. “There’s something you can do about taking a vaccination, and I just don’t agree with bringing it to the same level.”

This article was written by Piper Hutchinson, with the LSU Manship School News Service.