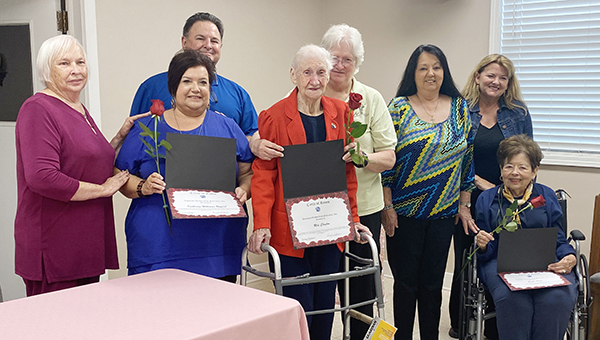 Bogalusa Garden Guild held its April meeting at First Baptist Church in Bogalusa. The meeting was called to order by President JoAnne Polk and the blessing was given by Jackie Boone.

The club celebrated their “Circle of Roses” recipients, which were Margaret Ryals, Rita Clayton, and the late Paula Haire and Catherine Williams.

The founder of the Circle of Roses was Bera Smith, president of the Louisiana Garden Club Federation in 1995. She wanted to do something special for the older members, those who had come before and had done so much for LGCF through the years. She and a friend came up with the idea for the “Circle of Roses.”

The purpose of this award is to honor hard work and dedication shown throughout the years of garden club membership. “These are the treasures — these are our ROSES.”

The club invited family members of the recipients to celebrate this honor.

Refreshments were provided by Bogalusa Garden Guild. Cake, punch, and sandwiches were enjoyed by all. Ellen Taylor, Regina Hunt and Margaret Ryals provided the decorations.

After the awards, Bogalusa Garden Guild was joined by Northeast Garden Club to begin ornament decorations for the Bogalusa City Hall Christmas tree.