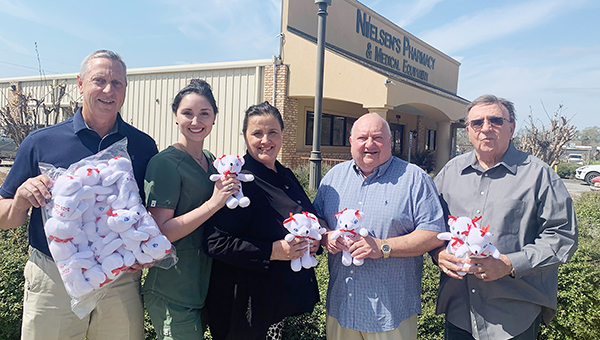 In March, the Krewe of MCCA donated 200 teddy bears to the Children’s ICU in Ochsner Baptist Hospital in New Orleans. Bill Nielsen has a “Just Born” grandson who has been a patient there for nine months, and his family has developed a strong personal relationship with the hospital staff there. Members of the Krewe of MCCA asked Nielsen and his family to present the bears to the hospital.

William Randolph Beckner is the son of Aaron and Sadie Nielsen Beckner and the grandson of Bill and Wendy Nielsen. William was born at 26 weeks, weighing 1 pound, 9 ounces. He has been in the NICU at Ochsner Baptist in New Orleans since making his arrival on June 12, 2021. Throughout William’s nine-month journey, he has made many new friends in his home away from home. Because of William’s fighting spirit he has become to be known as “The Bull.”

William’s road has not been easy, but his fighting spirit has seen him through thus far. William wants to thank everyone for all of their prayers, support and good wishes.

Also, William says … a special thank you to MCCA Captain Don Spiers, Stephen Genco and the Krewe of MCCA for their generous donation of the sweet little “Ruby” bears that will brighten up the 53 current babies’ rooms, as well as many that will follow.