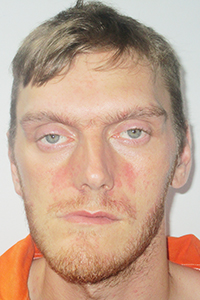 Late Wednesday afternoon, a Washington Parish Sheriff’s Office deputy was patrolling south of Bogalusa when he observed a vehicle parked in the corner of a church parking lot, according to WPSO Chief Criminal Deputy Mike Haley. No other vehicles were in the area and no church activities were being held.

“As the deputy approached the vehicle, he observed the driver attempting to place something under the seat,” Haley said. “The driver, who appeared to be under the influence of something, was compliant with the deputy’s commands, admitted that heroin was in the vehicle and consented for the officer to conduct a search. During the search, the deputy discovered not only the heroin, but also a syringe.

The driver, identified as Hunter Lane Jones, 26, a resident of Lee’s Creek Road, was arrested and transported to the Washington Parish Jail.

Once at the jail, Jones was booked on charges of possession of heroin and possession of drug paraphernalia. His bond was set at $5,000. Haley said that Jones has previous arrests in 2012, 2013, 2015, 2016 and 2017 for various criminal offenses, including driving while intoxicated, battery, possession of stolen property and violating the terms of his probation.

“It seems obvious Mr. Jones was not headed to Sunday School,” Washington Parish Sheriff Randy Seal said, “although that would be a good destination for him. Heroin use is a good example of someone who needs help with their lifestyle choices. I suggest he obtain that help.”