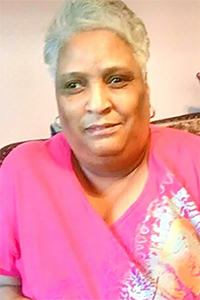 Kimberly Susan Terrell Hooks was born Oct. 11, 1965, to parents John Hammond and Gloria Keil Terrell of Bogalusa. Kim had been ill for quite a while and, after a long fight, she passed away on March 23, 2022, at PAM Rehabilitation Hospital in Covington.

Kim was a graduate of Bogalusa High School and worked for nearly 30 years at the hospital in Bogalusa, until health issues forced her to retire.

Kim was known for her thoughtfulness, kindness and generosity. She loved people, especially members of her family and she loved to talk to them. She made a concerted effort to keep in touch with family members and to check on as many as she could on a regular basis. One of her other passions was cooking. This is what she did at the hospital for all those years and she was very good at it. Some friends and neighbors often asked her to cook a specialty dish or bake a favorite dessert for them.

Kim was baptized as one of Jehovah’s Witnesses on May 4, 1985. She spoke often to others about her faith and, even though at times she was gravely ill, she endeavored to be at all of her congregation meetings. Kim often voiced how happy she was now that she was practicing all the things she was learning through her study of the Bible, her appreciation for her faith, participating in her ministry, helping others to learn about the good news from the Bible and the promises that Jehovah God has made to his people. When she was no longer able to go in the door-to-door ministry, she especially appreciated the opportunity to share in letter writing and telephone witnessing.

Kim was preceded in death by her mother, Gloria Keil Terrell, and father, John Hammond; brothers, Christopher Terrell, David Todd Terrell and John Dewayne Penton; and sister, Valarie Terrell Johnson. She is survived by her husband, Walter Hooks and leaves behind to mourn her brothers, Andree (Betty) Powell, Michael Terrell, and John Wayne Penton; and a sister, Myra Elaine Keal. She also leaves behind aunts, uncles, nieces and a host of cousins.