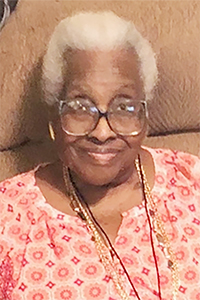 Frankie Lee Burrell was born on May 10, 1932, to the late Willie Mae and Morris Johnson and J.C. Brown in Hackley.

She was united in holy matrimony for 49 years to the late Willie Burrell. To that union, five children were born. She was the true definition of a nurturer and played an integral role in the molding and upbringing of many children.

She was preceded in death by her parents, husband, two sisters, brother, two daughters, three nephews and one niece.

Drive-through viewing will be Friday, April 1, from 4 p.m. until 7 p.m. at Crain and Sons Funeral Home. The funeral service will be Saturday, April 2, at 11 a.m. at Sweet Beulah Baptist Church in Bogalusa.

Interment will be at the Robinson Cemetery in Varnado.