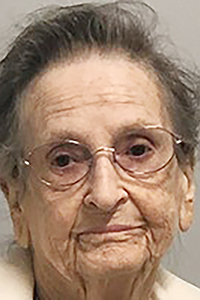 Bertha Mae Miley Moody, 92, a resident of Bogalusa, passed away on Saturday, March 19, 2022, at Heritage Manor in Franklinton. She was a loving mother, wife, grandmother (Granny), and friend. She was a lifelong member of First Pentecostal Church in Bogalusa, and she enjoyed her hobbies of cooking, sewing, crocheting and loving her family.

She was preceded in death by her parents, Joe and Della Miley; and her sister, Lucille Corbello.

Visitation was held Monday, March 21, from 5 p.m. until 9 p.m. at First Pentecostal Church of Bogalusa, located at 14532 Louisiana Highway 21, and resumed Tuesday, March 22, at 10 a.m. until time for the funeral service at 11 a.m. at the church. The Rev. Travis Houston and Rev. Kevin Cox officiated and interment followed at Lon Miley Cemetery in Bogalusa. Pallbearers were Shea Knight, Blake Fasola, Trey Moody, Duane Fuller, Raymond Williams and David Wilson.

Poole Ritchie Funeral Home and Crematory is in charge of the arrangements and the online register book may be viewed and signed at www.pooleritchiefuneralhome.com.