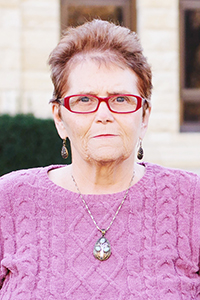 She was born May 22, 1947, in Grand Island, Neb., the daughter of Harry and Helen Jane (Arthur) Morrow. She was a graduate of Westminster High School in Colorado in the class of 1965. On Aug. 7, 1982, she was united in marriage to Harold F. Perrett in Westminster, Kan., and they celebrated 40 years of marriage. In 1992, she graduated Cum Laude from Southeastern Louisiana University with a Bachelor’s Degree in Social Work and worked as a social worker at Hays Medical Center. She attended Immaculate Heart of Mary Catholic Church. Esther enjoyed reading, baking, movies, and never missed watching the Oscars every year with Harold. Esther was loving and kind, never met a stranger, put others’ needs ahead her own, and through all challenges possessed a positive spirit. All who knew Esther loved her, especially her family whom she loved most of all.

She was preceded in death by her parents and two brothers, Patrick Davis and Harry Morrow.

A celebration of Esther’s life will be at a later date in Colorado, and inurnment will be in Ponemah Cemetery in Bogalusa in the Perrett family plot. Memorials are suggested to Catholic Charities or to Hospice of HaysMed.

Condolences and memories of Esther may be shared with her family online at www.haysmemorial.com.