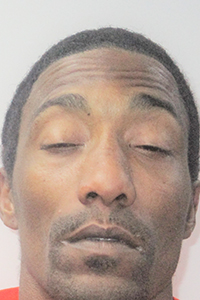 On Sunday, while on criminal patrol in Bogalusa, two Washington Parish Sheriff’s Office deputies made contact with Quincy Forbes, 37, a resident of Mitchell Road, according to WPSO Chief Criminal Deputy Mike Haley.

Haley said that Forbes was in possession of marijuana, methamphetamine and suspected crack cocaine. In addition, he reportedly had a fully loaded .25 caliber semi-automatic pistol and a fully loaded spare magazine in a pants pocket.

Haley said that Forbes has previous incarcerations in Washington Parish, beginning with a 2008 arrest for possession of illegal drugs, resisting arrest by flight and numerous traffic violations. Two years later he was arrested for burglary. In 2011, he was charged with possession of stolen property and failure to appear in court. He faced theft and criminal trespass charges later the same year. In 2019 he was booked into jail on three counts of failure to appear in court. His final previous arrest was in 2019 on charges of armed robbery and possession of stolen property.

“This is yet another example of the danger law enforcement officers face daily in the performance of their duties,” Washington Parish Sheriff Randy Seal said. “When a convicted felon carries a fully loaded pistol and additional ammunition in his pocket, one can only assume his intentions are not honorable. I am pleased our officers were able to make the arrest without incident.”