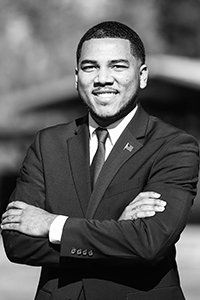 Editor’s Note: This article was submitted by the candidate.

In a three-minute video posted to Facebook and Instagram, Tyrin Truong has become the first candidate to officially enter the race for mayor this November. Truong is the son of Thy Phuong Truong and O’trevious Romel Harris, and grandson of Valerie Robinson, Toan Truong, Annice Morris and Barbara Jean Roberts.

Tyrin recently graduated from Washington University in St. Louis, ranked No. 14 academically, where he served as student body president, managing a $3.7-million budget. Growing up, he was selected as Bogalusa City Schools Student of the Year. While in college, Tyrin completed multiple stints in Congress, working for U.S. Rep. Lacy Clay. Upon returning home, Truong accepted a teaching position at Central Elementary. He currently serves as Director of Policy for the Urban League of Louisiana. Tyrin also leads a youth organization called Better Bogalusa.

“I’m running for mayor because bold, structural change is long overdue. All across our city, people want proactive leadership determined to lead us toward better. It’s time to stop focusing on what we can’t do and instead focus on what we can do to improve the lives of our citizens. There are so many opportunities for our city that remain untapped.” Truong said.

“We can get a handle on crime while rebuilding an economy that will help our small businesses that make up the fabric of our community. We have a major highway being built, plenty of land, low cost of living and an airport that can be reimagined to bring in new industry. I believe in Bogalusa’s tomorrow!”

Truong, a former educator, plans to focus heavily on improving quality of life for the children of Bogalusa.

“The youth in Bogalusa have limited positive activities. There are improvements being made, but there is so much more the City can and should do. It’s time for kids to be kids again. We will build more sidewalks and neighborhood parks under my administration.” Truong pledged.

Learn more about Tyrin Truong and his campaign by visiting www.tyrinforbogalusa.com. He can also be reached at 985-516-4252.