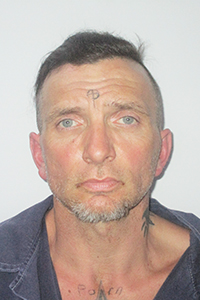 On Tuesday, a Washington Parish Sheriff’s Office narcotics detective was in the right place at the right time, according to WPSO Chief Criminal Deputy Mike Haley.

“As the detective approached Pierce, he observed a possible weapon protruding from Pierce’s pocket,” Haley said. “Nevertheless, he was able to place Pierce in handcuffs, at which time he conducted a clothed body search. Pierce had both marijuana and methamphetamine in his backpack. In addition, the detective learned Pierce had two outstanding warrants for failure to appear in court.”

Pierce was transported to the Washington Parish Jail, where he was booked on two counts of failure to appear in court, two counts of possession of illegal narcotics and obstruction of a highway. His bond was set at $13,750.

Haley said that Pierce has a previous history of being jailed in Washington Parish, beginning with a 2007 arrest for burglary and criminal damage to property. He was arrested a month later for purse snatching and failure to appear in court. Even later in 2007, he was arrested for a third time for issuing worthless checks. Then, in in November 2007, he was arrested as a fugitive from Pearl River County, Mississippi.

In November 2014, Pierce was arrested on two counts of failure to appear in court. He was not arrested again until 2021 when he was charged with disturbing the peace in a violent and tumultuous manner and resisting an officer by flight on foot. His current arrest is his seventh since 2007.

“Dangerous, simply dangerous,” Washington Parish Sheriff Randy Seal said. “Pierce was posing a danger not only to himself but also to innocent motorists on Highway 10. I’m so glad our detective observed what was happening, so he could get Pierce off of the side of the roadway.”