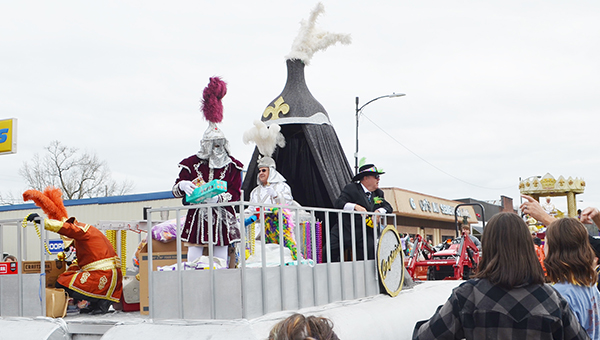 The MCCA captain rides on his traditional float during this year’s parade. The captain noted that MCCA has overcome lots of challenges in its storied history.

Editor’s Note: This article was submitted by the MCCA Captain.

Jan. 5, 2022, was the 42nd birthday of the Magic City Carnival Association. We had “seen a lot” in 42 years. We had seen the Magic City population shrink to 11,500 residents. Though we had initially hoped in 1981 that a Mardi Gras Parade through “downtown” Columbia Street would somehow revive business activity at the famous and faltering J.C. Penney department store, and the other downtown department stores, and the hardware stores and the drugstores … we had seen them all disappear. MCCA persevered.

Five years later, we saw a Frenchman named James Goldsmith who never saw a MCCA parade, nor even ever saw Bogalusa or Washington Parish, seemingly with minimal effort, acquired controlling ownership in the Crown Zellerbach Corporation. We saw Sir James immediately shut down the high-employment operations here — curtailing hundreds of careers and employees, and then sell off the paper mill and the vast timberlands. MCCA persevered.

In 2020, the MCCA Captain suffered a cerebral stroke just five days before the Coronation Ball and a week prior to the 40th parade. MCCA’s officers “came to the front,” dutifully held a beautiful coronation and then a parade, with the Captain observing from a prepared reviewing stand location. It was his first parade to view of the first 40 parades presented. MCCA persevered.

As if it had been launched by the closing of the 2020 Mardi Gras season, the world — including the Magic City — was stricken by the deadly coronavirus epidemic. Like thousands of other festivals, celebrations, shows, and scheduled events, the entire 2021 Mardi Gras season of the Magic City Carnival Association (Krewe of MCCA) was cancelled. A line was drawn through the planning and preparations that were underway. Carnival and Mardi Gras season was put into suspended animation for a full year. MCCA determined to persevere.

Activities of the MCCA 2022 season started with a struggle. COVID-19 cases, now called “Omicron,” were still in high presence in the news and on everyone’s mind, and “positive testing” was the most common term in the community. Then, the Krewe of MCCA was notified that the two tractor dealers who had generously provided scores of tractors for the parades for years would not be able to provide parade tractors, as they could not themselves acquire tractors even for their dealerships.

Traditionally, the MCCA Carnival Season is a period of eight weeks. We always begin with the revealing of the season’s King and Queen and Court, and conclude eight Saturdays later with the presentation of the amazing MCCA parade. Hamstrung by the lingering fright and presence of Omicron, and the confusion caused by the now two years of being “shut down,” the 2022 Carnival season’s activities began with the float groups functioning in an “injured” sort of way, with lagging membership renewals, party venue cancellations, and facing for the first time ever the unavailability of tractors. MCCA determined to persevere.

By the fourth weekend of the season, the previously daunted spirit of the Krewe seemingly began to awake. The King and Queen, both residents of the Franklinton community, and both wonderfully dedicated to MCCA, hosted a beautiful reception and dinner dance at Covington’s Vintage Court. The event flourished with excited, recommitted guests. It was evident that MCCA was “back” on track, and beginning to look like it had every season for 41 years. The next three weekends were full-speed ahead. The Coronation Ball was beautiful beyond precedent, and boasted a capacity attendance that celebrated to well past closing time. MCCA perseveres.