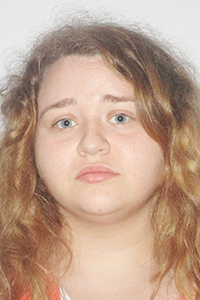 Twenty-year-old Brooke Bordelon, a resident of 11th Street in Franklinton, is in the Washington Parish Jail after her second episode of fleeing from a Washington Parish Sheriff’s Office patrol deputy, according to WPSO Chief Criminal Deputy Mike Haley.

“Late in the evening of March 6, a Washington Parish Sheriff’s Office deputy was patrolling on Highway 25 south of Franklinton when his radar clocked a vehicle traveling 86 miles per hour,” Haley said. “He pursued the vehicle and observed the driver swerving into the oncoming lane several times before reaching a speed in excess of 110 miles per hour. As he continued his pursuit, the deputy observed the driver attempt to turn onto Fisher Road, lose control of the vehicle and crash into the wood line.

“The driver backed onto the highway and continued south on Highway 25 at speeds up to 90 miles per hour. The vehicle finally came to a stop near the St. Tammany Parish line at which time the deputy, along with another deputy who arrived to assist, apprehended both Bordelon and her passenger, Antonio Magee, who had an outstanding warrant for contempt of court.”

Haley said that Magee was issued an arrest summons and provided with a new court date. Due to his passive involvement in the chase, he was not jailed.

Haley said that Bordelon was in possession of marijuana, which she had stuffed down the front of her pants. In addition, an empty vodka bottle was reportedly located inside her vehicle.

Bordelon was arrested and transported to the Washington Parish Jail, where she was booked on charges of aggravated flight from an officer, possession of marijuana, speeding 31-40 miles per hour above the speed limit, no driver’s license, no proof of insurance and having an open container in her vehicle.