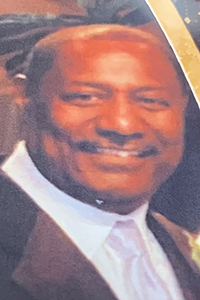 Hugh Edward Jones Sr. was born on Dec. 18, 1944, in Bogalusa, to Alvin Jones and Martha Smith Jones. In 1962, he graduated from Central Memorial High School in Bogalusa, after which he served his country for three and a half years in the U.S. Navy.

After serving his country, he decided to begin the next phase of his life in Los Angeles, Calif. Although Hugh met Azie Lewis in Louisiana, their married life began on June 4, 1966, in Los Angeles, Calif. To this union, his love expanded when his baby girl Coretta Jones was born. Just when he thought his life was complete, the Lord smiled and blessed him with his first son, Hugh Edward Jones Jr.

For nearly 20 years, Hugh was employed by Crown Zellerbach Paper Industry. There, he formed lifelong friendships that became an extended family. Hugh loved people and enjoyed serving his community. He was a classy man who loved classic things — if it was a Lac, as in Cadillac, you would find Hugh Edward driving it. On May 10, 1998, in Las Vegas, Nev., Hugh Edward Sr. married Lucy Mingo and their life’s journey began. His love was amplified even more when his second son, Avie Hugh Jones, was born. He made a career with Pacific Bell where he retired on his son Hugh Jr.’s birthday Jan. 6 after 25 years.