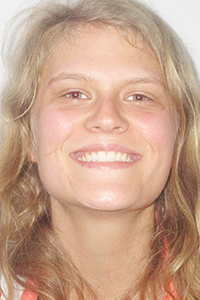 Late Monday evening, a Washington Parish Sheriff’s Office sergeant was sitting stationary on the shoulder of Louisiana Highway 10 near the intersection with Burt Road when his radar clocked an eastbound vehicle traveling 91 miles per hour. After a brief pursuit, the sergeant encountered the driver, Amber Ann Alleman, 22, who gave an address in Ocean Springs, Miss. Two small children were in the vehicle, properly restrained in car seats, according to WPSO Chief Criminal Deputy Mike Haley.

The sergeant attempted to issue Alleman a ticket for careless operation of a motor vehicle, at which time she snatched the ticket book from his hand, initially refused to return it and finally threw it at the officer. Haley said that Alleman was directed to exit her vehicle, at which time she began to drive forward, running over the officer’s foot, causing the sole of his boot to detach from his footwear.

“The officer then directed Alleman to put her vehicle in park and exit,” Haley said. “She refused to do so. The officer then attempted to unlock the driver’s door, at which time Alleman rolled the window up, pinning the officer’s arm. The sergeant was finally able to unlock and open the door and placed handcuffs on Alleman. As she exited her vehicle, she continued to resist before being brought under control.

“As Alleman was being placed in the rear of the transport vehicle, the grandmother of the minor children drove by, recognized Alleman’s vehicle and stopped. With Alleman’s permission, the children’s grandmother took custody of them. Alleman was transported to the Washington Parish Jail.”

What initially started out as a single traffic violation turned into additional charges due to Alleman’s behavior. She was booked into the jail on charges of reckless operation of a motor vehicle, battery on a law enforcement officer, aggravated battery on a law enforcement officer, criminal damage to property and other charges. Her bond was set at $40,000.

“Several words come to mind, including immature and irresponsible,” Washington Parish Sheriff Randy Seal said. “Driving at such a high rate of speed is bad enough. Having two minor children in the vehicle only compounds the issue. I am so grateful the children were safe and could be released to the custody of their grandmother.”