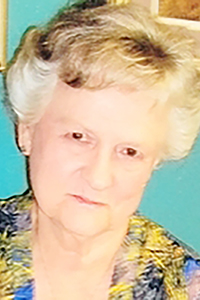 “Therefore, you too have grief now, but I will see you again, and your heart will rejoice, and no one will take your joy away from you” (John 16:22).

Joyce Teddlie Puckett, 91, resident of Bogalusa, passed away peacefully Sunday, Feb. 27, 2022, in the presence of her loving children. Joyce loved spending time with her grandchildren and great-grandchildren, as well as employing her amazing arts and crafts talents into projects that she joyfully gave to others. She was a member of ESM Methodist Church for over 50 years, where she attended regularly until the last few years, and was active in the UMW there.

Joyce was a retired nurse anesthetist, but never lost her passion to care for others and volunteered at the local area Help Center, as well as being a member of her local Civic League. She also volunteered as a Pink Lady at her local hospital after retiring.

She is survived by her sister-in-law, Sue Teddlie of Marrero, and four children, Allen (Cheryl) Puckett, Beth (Billy) Pounds and Susan (Richard) Breland, all of Bogalusa, and Trish (Jay) McDaniel of Marksville; along with several nieces and nephews.

Visitation will be held Thursday, March 3, from 9 a.m. until time for the services at 11 a.m., at Poole-Ritchie Funeral Home, with interment to follow at Hillview Memorial Gardens.

The family would also like to thank the caregivers and friends at Resthaven Living Center of Bogalusa, for their unwavering care, loving kindness, and friendship.

In lieu of flowers, the family asks that donations be made to ESM United Methodist Church “In Memory of Joyce Puckett.”