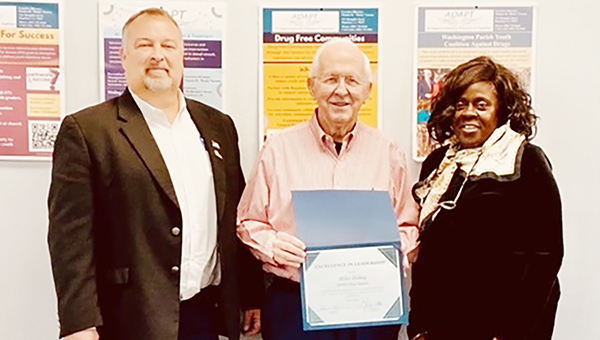 Washington Parish Coalition on Human Services (WPCHS) held its February meeting at the ADAPT office in Bogalusa on Tuesday.

Special guests at the meeting included MCCA XLII King Johnny Passman and Queen Theresa Wascom. Also, Krewe of Unity V King Glennis E. McKelphin Jr. and Queen Danielle Keys were recognized. According to King Passman, the parade will roll at 1:00 p.m. on Saturday. Everyone is encouraged to come enjoy the revelry. Rusty Fornea, ADAPT Executive Director, presented gifts to the royal guests. WPCHS President Gloria Kates challenged the guests to “let the good times roll” as she presented each with a certificate of appreciation.

Dr. Mike Haley, Chief Criminal Deputy at the Washington Parish Sheriff’s Office, was the guest speaker. He spoke about the opioid epidemic, which continues to grow each year.

Haley said, “According to the Centers for Disease Control, 100,306 people died in the United States from overdoses during 2021.” Louisiana reported 2,251 overdose deaths for this same year. This was a 37.2-percent increase from the previous year.

Washington Parish reported 35 overdose deaths during 2021 — this is equivalent to three persons losing their lives to overdose each month. Haley suggested that opioid and other addictions are a spiritual issue, which needs to be addressed through a faith-based program. Haley commended ADAPT for the work they do in the community to bring awareness and education to the citizens of Washington Parish.