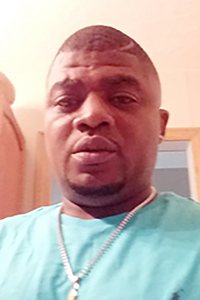 Joseph Thompson was born Sept. 13, 1977, in Bogalusa, to Golda Thompson and the late Danny Thompson Sr. He departed this life Feb. 11, 2022, in Morgan City. Joe was a graduate of Bogalusa High School.

He was preceded in death by his father, Danny Thompson Sr.; grandparents, Nellie and Andrew Bennett, and Charlie and Marie Dee; and brothers, Samuel Lee Plummer and Brandon Thompson.

Visitation will be held Thursday, Feb. 24, from 4 p.m. until 6 p.m. at Crain and Sons Funeral Home in Bogalusa.

The funeral service will be Friday, Feb. 25, at 2 p.m. at Crain and Sons Funeral Home in Bogalusa, with the Rev Martin L. Gray III officiating. Interment will be at Ponemah Cemetery.