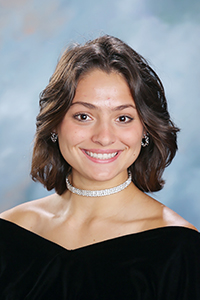 Franklinton High School senior Ava Roshto was awarded one of only seven Louisiana Association of Fairs and Festivals scholarships at its recent convention in Baton Rouge.

According to fair secretary Kaye Ladner, there are seven districts across in the state that make up LAFF. One recipient in each district is awarded a $500 scholarship in a highly competitive contest that includes an application, an essay, academic record, school and community involvement as well as involvement in the districts’ specific fair and/or festival.

Roshto is a member of the Merchandise Committee and works tirelessly in helping organize the pre-sale events held each year, as well as the merchandise pre-sale in area schools. She can also be found volunteering at Mile Branch Settlement and at the membership ticket booth.

She is an FHS cheerleader, member of the Demon Regiment, and is active in National Honor Society and National Beta Club as well as the FHS powerlifting team. She was named to the 2021 homecoming court and maintains a 4.04 grade-point average.

Roshto plans to attend Louisiana State University in the fall of 2022 and major in Biological Sciences. She is the daughter of Adrian and Kal Roshto.