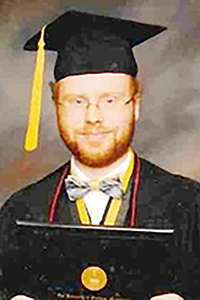 Ethan Cade Varnado, a resident of Houston, Texas, passed away at his home on Tuesday, Feb. 15, 2022.

Cade, as he was known, was raised in the Rio community just outside of Bogalusa. He attended elementary school at Annunciation Catholic School. He then attended St. Paul’s School in Covington, where he graduated with high honors. While at St. Paul’s School, he participated in theater, captained both the junior varsity and varsity Quiz Bowl teams, and represented the school in the National Geographic Geography Bee, placing fifth in the state out of over 100 participants.

Cade then accepted a graduate assistantship at Virginia Commonwealth University in Richmond, Va., where he worked his way through graduate school. He earned his Master of Fine Arts degree in Creative Writing. While there, he served as the coordinator of the James Cabell First Novelist Award. For his thesis project, he completed his first novel.

After graduation, Cade began his professional working career as a professor at San Jacinto College in Houston. He taught a number of English and Humanities classes. One of his favorite classes to teach was based on the Sixties. He enjoyed sharing with his students the sixties artists he had seen in concert, especially Ringo Starr, Bob Dylan, Joan Baez and Arlo Guthrie.

Throughout his relatively short life, Cade also had a number of other adventures and accomplishments.

He became active in Scouting as an elementary student. He earned every possible rank as a Cub Scout and Boy Scout, including the rank of Eagle Scout. While as a scout he had the opportunity to earn the 100-miler award, as well as rafting the Ocoee River for the first of three times.

Cade successfully applied for an opportunity to appear on Jeopardy. He went through the selection process, which included extensive testing and interviews, and was selected as a contestant. He flew to Los Angeles and appeared on the show, scoring over 20,000 points, but coming in a close second. He was so disappointed; he never watched the show again.

Cade loved to travel to new places. He had been to New York City, Los Angeles, Chicago, San Francisco, Washington D.C., and Maine, as well as all the southern and east coast states.

Cade had a love and gift for the language arts. He had successfully completed courses in Spanish, Latin, Greek and Russian. He was currently in his second year of Japanese classes with the Japan American Society of Houston, preparing for a possible trip to Japan.

He was currently editing his second novel, which had already drawn interest from those in the literary community.

Cade was preceded in death by both sets of grandparents, Jewel J. and Bobbye Varnado Jr. and Jerry and JoAnn McGehee.

Visitation will be held on Sunday, Feb. 27, at Poole-Ritchie Funeral Home from 9 a.m. to 2 p.m., with a service at 2 p.m. The Rev. Tommy Pittman will officiate, with internment to follow in the Varnado family plot in Ponemah Cemetery.

Special thanks to Jon and the staff at San Jacinto College for all their support and help during our most recent time in Houston.

Cade was recently described to us as a kind soul with a brilliant mind. We have to agree.