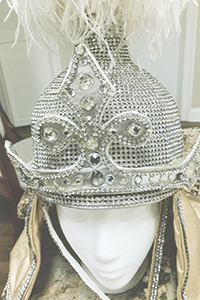 The MCCA Captain’s helmet was originally used in a major New Orleans parade.

The magnificent helmet of the Krewe of MCCA Captain is a legend. The 75-year-old majestic helmet was designed and constructed in 1947 for the first Captain of the Krewe of Thoth in New Orleans. The helmet is covered with 6,600 Austrian crystal rhinestones.

In 1986, the fifth year of the Krewe of MCCA, Captain Don Spiers was having a costume made by a designer in Kenner. The costume maker told Spiers of her friend out in Uptown New Orleans who possessed a beautiful headpiece which had belonged to her husband, the deceased Thoth Captain, and that she would call to ask if she would lend it for the MCCA Coronation Ball.

Two days later, she called to say that the lady had agreed to lend the helmet for the Ball, and recommended that it would be well worth the drive down there for the opportunity to wear this beautiful piece. At the visit, the lovely lady informed Spiers that she had conferred with her children and that all agreed that the former Captain would much prefer that the helmet appear in Mardi Gras Balls rather than being stored in her attic, and that he could purchase it instead of borrowing it.

The MCCA Captain acquired the helmet and has worn it in MCCA Balls and Parades for the past 35 years. In 1996, MCCA member Buck Moseley personally constructed a Mardi Gras Parade float modeled after the helmet, and donated it to Spiers. The float has been used ever since, as the present-day Captain’s Float.