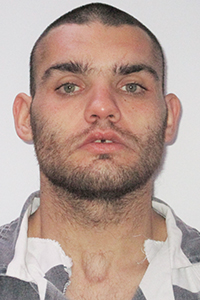 On Wednesday, in response to a complaint of an intruder, a Washington Parish Sheriff’s Office patrol deputy went to a residence off of Highway 436, according to WPSO Chief Criminal Deputy Mike Haley.

Haley said that the deputy learned that Justin A. Carter, 23, a resident of Dogwood Valley Road, had pushed his way into a home, threatening the female resident while he held a blunt object in his hand.

In fear of what Carter might do, the lady armed herself with a wooden bat and told Carter that her husband would be there soon, Haley said, noting that Carter fled at that time.

Haley said that the patrol deputy and his lieutenant then began to search the area and were able to locate Carter on M. Carpenter Road. He was reportedly on the property of another woman, who was yelling at him to leave.

Carter was arrested and transported to the Washington Parish Jail, where he was booked on charges of home invasion and aggravated assault. His bond was set at $25,000. Haley said that he has one previous arrest in 2021 for use of counterfeit money.

“This could easily have escalated into something much worse,” Washington Parish Sheriff Randy Seal said. “A woman home alone, an intruder who forces himself into the residence and a husband who would soon arrive is a recipe for a potentially disastrous outcome. I’m so glad our deputy was able to quickly locate Carter and take him into custody.”