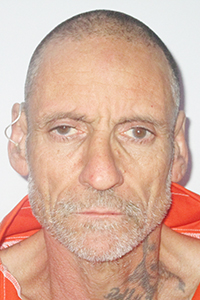 On Monday, Zack Nichols, 54, a resident of Nolan Lane, was driving a sport utility vehicle with an expired Texas license plate when he was observed by a Washington Parish Sheriff’s Office patrol deputy, according to WPSO Chief Criminal Deputy Mike Haley.

With the deputy in pursuit, Nichols refused to stop, proceeded to a residence on Mitch Road and drove his vehicle to the rear of the property, Haley said. The deputy followed.

“When Nichols exited his vehicle, he challenged the deputy’s presence because he was on private property, all the while yelling for someone to come to his aid,” Haley said. “When the deputy approached him, Nichols physically resisted before he was handcuffed and placed in the rear seat of the deputy’s patrol vehicle.

“Once he was secured in the vehicle, Nichols continue to yell and scream, then began to kick and head-butt the vehicle’s restraining cage. After being informed by the deputy that he would deploy OC spray if the head-butting did not cease, Nichols continued his bizarre, and possibly harmful, behavior. It was only after the deputy administered a short burst of OC spray that Nichols finally complied.

“Nichols was then decontaminated with cool water before he was transported to the Washington Parish Jail where he was booked on charges of resisting an officer physically and by flight, no driver’s license, no proof of registration, no proof of insurance, and improper equipment.”

“If there are lessons to be learned from this, they are go to court on your scheduled court date and comply with directives from a law enforcement officer,” Washington Parish Sheriff Randy Seal said. “It’s as simple as that.”