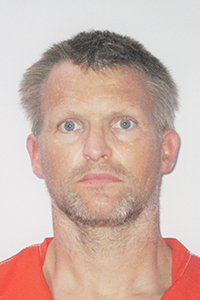 On Monday, agents with the Louisiana Division of Probation and Parole were in pursuit of William Brock McCrory, 42, a resident of Carolina Avenue in Bogalusa. When confronted by the agents at a Franklinton business, McCrory fled on foot and was captured by an agent near a fast food establishment, according to Chief Criminal Deputy Mike Haley of the Washington Parish Sheriff’s Office.

Haley said that detectives with the WPSO Drug Task Force were summoned to the scene, due to narcotics in McCrory’s possession. McCrory’s car, which was in the parking lot when he fled on foot, was searched and detectives discovered a varied assortment of illegal narcotics, including heroin, methamphetamine and two brands of narcotic pills, Haley said.

“Mr. McCrory’s lifestyle involving illegal drugs speaks for itself,” Washington Parish Sheriff Randy Seal said. “Once again, our officers partnered with another agency to get more illegal drugs out of our community. I am so appreciative of the wonderful Probation and Parole agents who work hard in Washington Parish to monitor persons who are under supervision. They are a great asset to local law enforcement.”