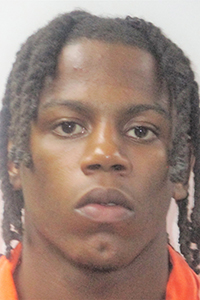 Eighteen-year-old Anterrius Jamyri Walker, a resident of Brock Road, was arrested on Friday after being stopped by a Washington Parish Sheriff’s Office patrol sergeant for speeding on Louisiana Highway 62 in Pine, according to WPSO Chief Criminal Deputy Mike Haley.

As the sergeant and another deputy approached Walker’s vehicle, they could smell a strong odor of marijuana, Haley said. When Walker was asked if any marijuana was inside the vehicle, he reportedly produced a bag of marijuana from the center console.

At that time, Walker was detained and additional marijuana was located inside the front of his pants and underneath the seat of his vehicle, Haley said. Deputies also reportedly located over $2,000 inside the pocket of Walker’s pants.

Haley said that Walker was asked if he had a job, and he replied that he was still in high school and does not work. A search of Walker’s vehicle reportedly turned up a .22-caliber semi-automatic pistol.

Walker was transported to the Washington Parish Jail and booked on charges of possession with intent to distribute illegal drugs, possession of illegal drugs with a weapon present and speeding.

“Logic denies why a high school student should be in possession that much marijuana and cash,” Washington Parish Sheriff Randy Seal said. “It can only be assumed that he has been selling the drugs. There is plenty of time for this young man to change his ways and become a productive citizen. I’m pulling for him to do just that.”