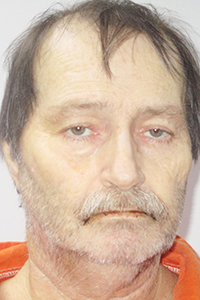 Early Saturday morning, a Washington Parish Sheriff’s Office patrol deputy responded to a complaint from a resident of an apartment complex on Louisiana Highway 16 south of Franklinton, according to WPSO Chief Criminal Deputy Mike Haley said.

Once he arrived at the scene, the deputy learned that Timothy Ard, 57, a resident of Hilltop Church Road, had attempted to force his way into an apartment and then went to other apartments, banging on the respective doors and creating a disturbance, Haley said.

“The deputy finally located Ard inside an empty apartment,” Haley said. “Ard refused to exit the locked apartment, forcing the officer to summons the apartment manager with a key. At that time, Ard exited the apartment and was taken into custody. Ard confessed that he had attempted to force entry into the first apartment because he wanted to fight the resident.

“After handcuffing and searching Ard, the deputy discovered a grinder and a quantity of white powder. When questioned about the white powder, Ard confessed that it was Xanax which he had been snorting.”

Ard was transported to the Washington Parish Jail, where he was booked on charges of attempted home invasion, possession of illegal drugs, disturbing the peace and resisting an officer.

“Mr. Ard obviously has significant personal issues,” Washington Parish Sheriff Randy Seal said. “The positive sides of this incident are that he was unable to gain entry into the apartment and our deputy was able to locate and arrest him.”