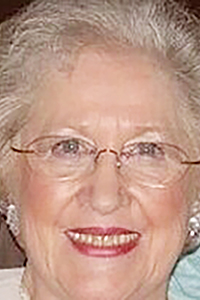 Nell Harvey Herrington passed away in Bogalusa on Feb. 1, 2022, at the age of 89. Nell was born in Shamrock, Texas. She lived in many states, including Oklahoma, Arkansas, Texas, Nevada, California, Ohio and Alabama before settling in Louisiana. Nell and her husband James Herrington moved to Bogalusa from Brewton, Ala., in 1963.

Nell was a member of Memorial Baptist Church, Calvary Baptist Church where she taught Sunday School, was a member of WMU, and served on the Hostess Committee. She also was a volunteer in many organizations such as Gideon Ladies’ Auxiliary, Civic League, Garden Club, the Y, Cassidy Park Museum, and Campfire Girls. Nell worked at Head Start for several years, and truly loved the children and staff.

Nell loved her family, spoiled her children, grandchildren and great-grandchildren — and until her death offered much wisdom and support for her family.

She was preceded in death by her parents, Douglas Harvey and Lois Harvey Drendel; her beloved husband of 51 years, James Edmond Herrington; her, brother Bobby Jo Harvey; her brothers and sisters-in-law, John L. and Vivian Smith, Buddy Herrington and Connie Harvey; her grandson, Edmund Douglas Herrington Jr.; and her great-grandchildren, Arizona Grace and James Ralph Hillmann.

Visitation will be held Saturday, Feb. 5, at Poole-Ritchie Funeral Home from 9 a.m. until time for the services at 11 a.m. The Rev. Chad Jenkins will officiate the services. Interment will follow at Garden of Peace in Ponemah Cemetery.