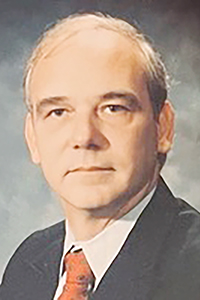 Washington Parish and the world at large are less interesting after the passing of James Saxon “Pete” Farmer. He peacefully departed his mortal bonds on Jan. 28, 2022, the day before his 74th birthday, at St. Tammany Parish Hospital while surrounded by his wife and children who love him dearly.

Pete was a lifelong resident of Bogalusa, where he practiced law after graduating from Southeastern Louisiana University and Louisiana State University Law School. He served in the U.S. Army Reserve and was an unapologetic American patriot.

Pete is survived by his loving wife of 31 years, Debbie Stallings Farmer of Bogalusa; daughters, Sunny Gray and her husband U.S. Army Sergeant First Class Stephen Gray Jr. and their children Stephen and Lydia, all of Broussard, and Summer “Farmer” Ellwood and her husband, Brad and their children, Zoe and Tatum, all of Ontario, Canada; a son, U.S. Air Force Captain Justin Farmer and his wife Dr. Zelmira Farmer and their daughter Stella Belle, all of San Antonio, Texas; and brothers, Marion “Kayo” Farmer of Atlanta, Ga., Paul Farmer of Bogalusa, and Lucien Farmer of Nashville, Tenn. Pete is also survived by many nieces, nephews and Debbie’s entire loving family, who Pete affectionately referred to as his “in-laws and outlaws.”

He was preceded in death by his mother, Dollie Ruth Farmer, and his father, Paul Marion Farmer.

Pete also leaves behind a cherished companion, Precious, who he proudly proclaimed was a show dog … “because she just showed-up one day.” His dry sense of humor, impeccable wit, calming presence and wise counsel are already missed by many, but his unyielding love and devotion leave the biggest void in those who knew him best.

Visitation will be Wednesday, Feb. 2, from 9 a.m. until 11 a.m. at First Presbyterian Church of Bogalusa. A memorial service will follow the visitation at 11 a.m., with interment immediately following the service at Garden of Peace in Ponemah Cemetery.