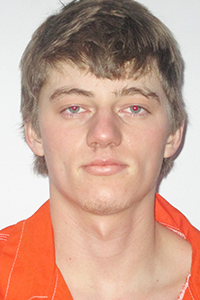 Nineteen-year-old Thomas Jeffrey Minarik III, a resident of Smith Road in Franklinton was arrested on Saturday for three counts of criminal damage to property, possession of alcohol by a person under the age of 21 and excessive noise. The arrest came after Washington Parish Sheriff’s Office deputies responded to complaints from neighbors about Minarik’s behavior, according to WPSO Chief Criminal Deputy Mike Haley.

Haley said that deputies learned that Minarik had driven his truck across a construction site and grassy areas in the neighborhood, causing property damage to the area. He also reportedly had been creating a disturbance by driving through the neighborhood and revving his engine at all hours of the night.

Haley said that when deputies encountered Minarik, he was obviously under the influence of alcohol, as evidenced by his inability to stand correctly and the strong smell of an alcoholic beverage on his breath. After being jailed, Minarik was released the same day after posting a $5,000 bond.

“Gross immaturity — those are the first words that come to my mind, upon learning of Minarik’s behavior,” Washington Parish Sheriff Randy Seal said. “Homeowners should be able to enjoy the quiet and privacy of their home without a neighbor’s childish behavior disturbing their peace and damaging their property. I hope Minarik’s arrest will be a wake-up call for him to grow up and be a good neighbor.”