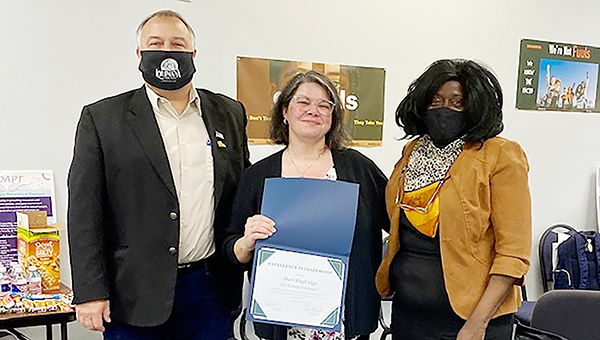 On behalf of the Washington Parish Coalition on Human Services, Executive Director Rusty Fornea and President Gloria Kates presents Sheri Eastridge with a “Certificate of Leadership.”

The Washington Parish Coalition on Human Services (WPCHS) held its January meeting at ADAPT in Bogalusa on Tuesday.

The guest speaker was Sheri Eastridge. She is a Training Coordinator for the Louisiana’s Adverse Childhood Experience (ACE) Educator program, and provided the program.

According to Eastridge, ACEs are very common. About two-thirds of the population have at least one ACE and about one quarter have three or more. The Adverse Childhood Experiences (ACEs) Educator Program offers ACEs training free of charge to organizations and community groups across Louisiana. To request an ACE Educator Training, email acepresentation@la.gov. The contact information for Eastridge is sheri.eastridge@la.gov and phone number is 985-201-5660.

During the meeting, Fornea presented Davis with a gift of appreciation for serving two consecutive years as the coalition president.