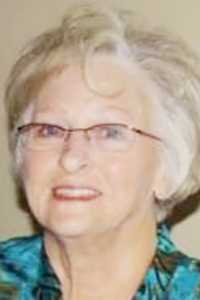 Stella Lee McKenzie Forbes, 80, was born April 7, 1941, in the Stateline community to Hilton and Oda Lee McKenzie. She was the last of her siblings to be born in the Kennedy Family home. She passed away at her family home of 68 years on Jan. 10, 2022, due to a lengthy illness.

Stella grew up on a dairy farm in the Stateline community and went to Pine School. She was very active in the sports of basketball and being a cheerleader for the football team. Stella was named Miss Pine High School her senior year of 1958. She met and later married her husband William “Dick” Forbes on Oct. 27, 1962. They were blessed to be married 59 years. They lived in New Orleans for a short time while Dick worked the shipyard. The couple moved back to the McKenzie land and welcomed their first child, Dana L. Forbes, in November 1963. They started building their forever home shortly after.

Stella was a wonderful mom and homemaker. She welcomed two more daughters, Shannon L. Forbes Barclay in October 1970 and Angela L. Forbes Thomas in November 1971. Stella was also blessed with a step-son, William Michael Forbes. Stella and Dick dedicated their life to their daughters. They were at every event they had and hauled them to all their sporting events. The daughters’ friends loved to go to “Miss Stella’s,” because they knew there would be an abundance of chips and dip and chocolate for days.

Stella was very active in Stateline Missionary Baptist Church, beginning in 1978. She was in the “young ladies” Sunday school class for over 30 years, that never changed the name because they were the “young ladies” of the church that helped keep everything going. Stella was always involved with the food hospitality for the church and community. If someone was sick or in need, she would be one of the first to volunteer to feed them.

Stella loved working in her yard with her beautiful flowers. She loved to have fresh cut flowers in her home. With Stella having three daughters, she became a frequent shopper while keeping the girls in the best clothing. Stella was also known as a classy dresser.

Stella and Dick spent lots of their time at the family’s log cabin in Walden, Colo. She took the kids during the summer for two months. Stella and Dick welcomed many family members, close friends and especially the girl’s friends. It was the best second home that the couple thoroughly enjoyed and made many friends in that community also.

Stella was blessed with four grandchildren and spoiled them every moment she could. She was forever a loving wife, mother, grandmother, sister and friend that will be sadly missed by her family and all that knew her.

Visitation was at Crain Funeral Home on Thursday, Jan. 13, from 11 a.m. until 2 p.m. A funeral service was held in the funeral home chapel at 2 p.m. Thursday, Jan. 13, with Bro. Brent King and Bro. Trey Jenkins officiating. Burial followed in the Crain’s Cemetery in Stateline.