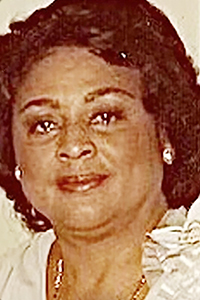 Juanita Travillion Brown was born in Bogalusa on Jan. 1, 1921. She passed on Jan. 13, 2022, at the age of 101 at Our Lady of Lourdes Hospital after a short stay after a fall fracturing her hip. She was a vibrant lady with a tremendous memory and a wonderful storyteller.

She finished high school in Bogalusa and attended Southern University where she received her BA degree in Business Education and continued her education, receiving a Master’s Degree at Southeastern Louisiana University.

She was married to LT. Lemuel N. Brown Jr. They had four children: Lemuel, Thomas, Marilyn and Lydia. As a military wife, she worked in U.S. Government Service as a clerk typist in Washington D.C., and also as the Director of a Veteran School in Canton, Miss.

She returned to Bogalusa and worked in the Bogalusa City School System as junior high school teacher. She continued her teaching career in the Louisiana Vocational and Trade School System and Washington Parish Correctional Institute totaling forty-three years. While teaching, she also typed many research papers and thesis papers for many educators and college students, typed for the Voters Registration Office and worked at Crown Zellerbach Cooperation in the Personnel Department during the summer months. She also participated in many in-state and out-of-state workshops as a participant or representative from her system.

She also served as church organist and pianist for the church choir at Thirkield Methodist Church in Bogalusa.

The drive-through viewing will be Thursday, Jan. 20, from 9 a.m. until 11 a.m. at Crain and Sons Funeral Home, followed by the funeral service at 11 a.m. with the Rev. Nolan Robinson officiating. Interment will be in Bogalusa City Cemetery.