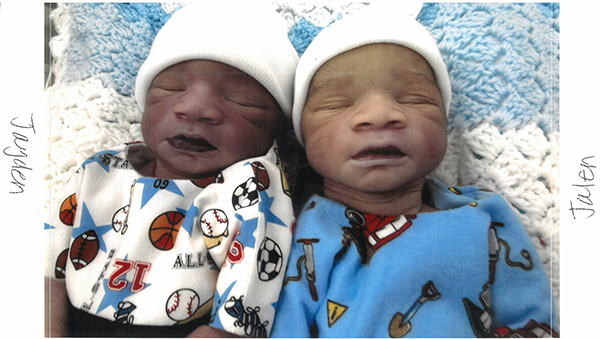 “Jayden and Jalen are two angels in glory, two beautiful baby boys with a beautiful story. They were carried in their mother’s womb with much love and care, with a father and a sister who was always there, talking and singing, feeling their kicks from inside; it is a bond everlasting, a bond that will forever abide, a bond that will forever abide in their hearts of love as these beautiful angels are now watching over their family with God above.” — Trina P. Williams

Jayden Terrell and Jalen Trumaine Williams were born to Jessie and Ti’Amber Williams on Jan. 9, 2022, at Lakeview Hospital in Covington, and they were summoned by God on that same day to their eternal home.

They were loved from the beginning to the end, and they will forever be treasured in the hearts of their family.

Funeral service will be Friday, Jan. 21, at noon at Crain and Sons Funeral Home, with Bishop Arnold Little I of New Orleans officiating. Interment will be in Bogalusa Cemetery.

Crain and Sons Funeral Home of Bogalusa is in charge of the arrangements.