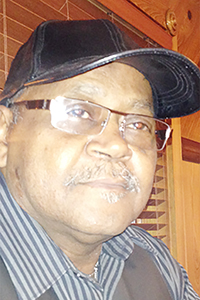 Donnie Rae Short, affectionately known as “Donald” or “Duck” to many, was born on March 2, 1952, to the late Elnora Fields Short and Tom Short. He was one of 11 siblings born to this union. Duck departed this life and returned to the Lord on Friday, Jan. 7, 2022, at the age of 69.

Duck was a star player on the 1969 Bogalusa High School Football Championship team. He helped to secure the most important win for the City of Bogalusa and brought the championship trophy back to Bogalusa High School. Although Duck possessed his own natural athletic abilities, he was skillfully coached under the direction and leadership of Coach Gary Magee, a well-respected leader in Washington Parish. Coach Magee and Duck fostered a bond that was very loving, a true example of coach to player relationship for life. Coach Magee shared this with Charlotte upon Duck’s passing that he considered Duck to be the son he never had. To this day, Duck still holds active records in football and track at Bogalusa High School that have never been broken.

Duck would always say that he met the love of his life on the campus of Southeastern Louisiana University. He met the former Charlotte Leche at Hammond Hall on campus. His late sister, Mary Denese Short Bridges, introduced him to her. Mary Denese and Charlotte were friends and lived next door to one another in the dormitory. Duck and Charlotte began dating and they built a very loving and beautiful relationship. They were married on July 14, 1978, at Our Lady of Grace Church in Reserve. They settled to live in Hammond, but moved to Reserve in 1979 to help take care of Charlotte’s mother who had become ill.

The two of them decided to make St. John the Baptist Parish their home. Duck grew into his new community well. He mingled and attended functions within his new neighborhood.

He and his wife were very active within Our Lady of Grace School and Church Community. Father Chris Armadi, the current priest of Our Lady of Grace Church, bestowed upon Duck the title of “The Bean Man.” Duck would often cook red beans for various activities within his parish community.

Duck loved his family and took great care of them. He adored his girls, Kimberley and Tara Short. He was elated finally to have some boys in the family with the birth of his grandsons, K’Saan and Ramahj Smith. Duck carefully taught his girls how to use basic tools and equipment to get many jobs done. Both of whom are very skilled at this.

Duck enjoyed the outdoors and loved to attend the New Orleans Saints football games as well as the New Orleans Pelicans basketball games. He and Charlotte were season ticket holders of both the Saints and Pelicans.

Duck had a great relationship with his co-workers at Marathon Petroleum Oil Refinery, his place of employment until retirement in 2007. He was a member of the Lutcher Tailgaters. He loved to tailgate with his club before all Saints home games near the Superdome.

Duck helped many people during his lifetime, both family and friends. When called, he would go, no questions asked.

Duck will be missed greatly by both family and friends.

Duck leaves behind to cherish his precious memories his loving wife of 43 years, Charlotte Leche Short; his two daughters, Kimberley and Tara Short; and his two grandsons, K’Saan and Ramahj Smith. His siblings include one brother, Willie Short of Alexandria, Annie Smith of Slidell, and Adrean Batiste (Raymond) of Bogalusa; sisters-in-law, Yvonne Leche Perkins and Georgia Short; and two brothers-in-law, Micheal Perkins and Walter Bridges.

Patrick H. Sanders Funeral Home of Laplace is in charge of the arrangements. COVID-19 protocols must be followed. Masks must be worn, and please practice social distancing.