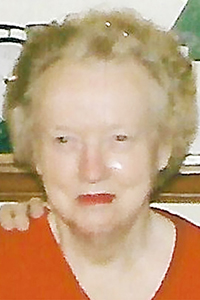 Betty Joyce Kennedy, 88, a resident of Riverview Apartments in Franklinton, passed away Thursday morning, Jan. 6, 2022. She enjoyed making crafts and going on trips with her friends at Riverview. Betty was a lifelong member of Stateline Missionary Baptist Church that enjoyed planting flowers and working in the yard. Her family was always the most important thing in her life and she loved drinking coffee and visiting with her beloved brothers. Betty adored her many nieces, nephews, great-nieces and great-nephews.

She is survived by two brothers and sisters in law, Jay “J.B.” and Joan Kennedy, and

Clyde and Yvonne Kennedy; and also numerous nieces, nephews and other family members

Visitation will be at Crain Funeral Home on Monday, Jan. 10, from 10 a.m. until 1 p.m. A funeral service will be held in the funeral home chapel at 1 p.m. Monday, Jan. 10, with Bro. Glenn Nace, Bro. Bryant Barnes and Bro. Trey Jenkins officiating. Interment will follow in the Seal Cemetery on Henry Kennedy Road.