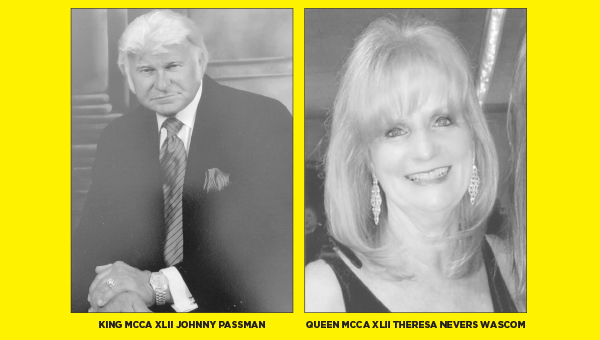 The Krewe of MCCA is pleased to announce its selection of Royalty for the upcoming Mardi Gras season. Reigning as King and Queen MCCA XLII are John R. “Johnny” Passman and Theresa Nevers Wascom.

The King is a lifelong resident of Franklinton, and is a longtime member of MCCA. He is married to Nancy Slade Passman and has two adult children. He is the son of Margie Thomas Passman.

He formerly owned and operated Cavalier Shoppe in Franklinton for 40 years. For the last 27 years, he has been the owner of John R. Passman Land Development, LLC. He builds rural subdivisions and finances property in Louisiana and Mississippi.

Johnny is an avid weight lifter and bodybuilder. He has been a musician all his life — playing trumpet and guitar. He has enjoyed his career in music, especially being a member of the Showboat Band.

He is a member of First Baptist Church in Franklinton.

Johnny is excited about being King MCCA this season and serving and representing Washington Parish.

Queen Theresa grew up and spent most of her life in Bogalusa. She was one of three children born to Ben and Iva Nevers, who were also longtime residents of Bogalusa. She and her husband Mac Wascom, whom she married five years ago, currently reside in Franklinton.

Theresa has been a member of a MCCA ladies group for 31 years. She is presently an active member of the GG’s.

She is a retired hairdresser, having owned and operated a successful business for many years. Theresa is an art teacher, a member of the Washington Art Association and a member of the Franklinton Women’s Club.

She is a member of the First Baptist Church of Franklinton.

Theresa is looking forward to being a part of the MCCA traditions connected with her role as Queen MCCA XLII.

The MCCA XLII parade is scheduled for Saturday, Feb. 26.