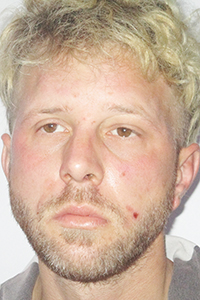 Wesley Bernard Williams, 34, who gives an address on Western Avenue in Hammond, was arrested Christmas Eve on outstanding warrants for contempt of court plus other charges incurred during the arrest, according to Chief Criminal Deputy Mike Haley of the Washington Parish Sheriff’s Office.

On Friday, Dec. 24, 2021, a WPSO deputy attempted to stop Williams who was driving in the Franklinton area, Haley said. Williams reportedly stopped on Highway 10 west and refused to exit his vehicle.

“Instead, he fled at a high rate of speed with the deputy in pursuit,” Haley said. “After turning onto Highway 440, Williams made an illegal U-turn. Reaching speeds in excess of 90 mph, Williams left the roadway and went into a ditch. As the deputy approached, Williams put his vehicle in reverse and attempted to strike the deputy’s vehicle before fleeing into adjacent woods.

“After a short foot pursuit, the deputy was able to tackle Williams, taking him to the ground. Williams physically resisted until the deputy was able to restrain him.”
Williams was arrested and transported to the Washington Parish Jail, where he was booked on two counts of contempt of court, aggravated assault with a vehicle on an officer, resisting an officer with force or violence and resisting arrest by flight. His bond was set at $50,000.

Haley said that Williams has previous arrests in Washington Parish, beginning with a 2007 arrest for unauthorized entry of an inhabited dwelling. His next Washington Parish arrest was in 2010 on charges of criminal trespass, battery and being a fugitive from the 23rd Judicial District Court.

Ten years later, he was arrested once again in Washington Parish on charges of unauthorized entry of an inhabited dwelling, criminal damage to property, possession of illegal drugs and failure to appear in court. In February of 2021, he was arrested for contempt of court and possession of drug paraphernalia. Eight months later, he was jailed on charges of burglary, criminal trespass and contempt of court. His latest arrest was his sixth in Washington Parish.

“If Williams had yielded when the officer pulled in behind him, he would have faced only the contempt of court charges,” Washington Parish Sheriff Randy Seal said. “Due to his choice to flee and then fight with our deputy, he now faces more serious charges. Very poor decisions always lead to very poor outcomes.”