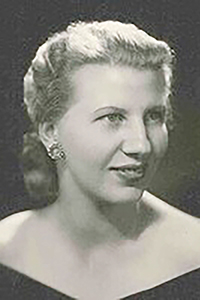 Lorraine “Betty” Schertz Hughes was born Feb. 1, 1927, and passed away on Dec. 20, 2021. She was a native of New Orleans, and a long-time resident of Bogalusa. She also lived in Port Arthur, Texas; Denham Springs; DeRidder; and Millard, Miss.

Betty was valedictorian of her class in 1943 at John McDonogh High School in New Orleans. As a graduate of LSU with a degree in chemistry, she was elected to Phi Kappa Phi National Honor Society as well as other academic honor societies. Betty was a chemist for The Texas Company (Texaco) in Port Arthur, before her marriage.

Betty served as President of the Suburban Reviewers Book Club in Denham Springs, where she was also a Blue Bird leader. She was also President of Seedling and Sapling, a woman’s auxiliary of the Louisiana Forestry Association; President of Civic League in Bogalusa; President of Ingleside Symposium; she was on the board of Bogalusa YMCA; and on the board of the United Way. She was a member of the Southeast Louisiana Historical Society, the Louisiana Forestry Association, L’Heritage Francais, a past member of the Bogalusa Country Club, and a member of two bridge clubs. Betty was an avid reader, an accomplished bridge player, and loved to dance and swim. Her greatest pleasure was her family — her husband, her children, her grandchildren, and her extended family.

Private funeral services were held at the Sanctuary of Peace Mausoleum at Ponemah Cemetery. In lieu of flowers, the family requests that donations be made to the St. Jude Children’s Research Hospital in Memphis, Tenn.