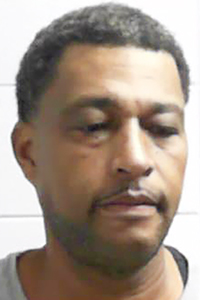 On Thanksgiving night, Nov. 25, the Bogalusa Police Department was called to Jr. Food Mart on Superior Avenue in reference to shots fired.

Upon arrival, officers interviewed a female victim who had been shot at. The initial investigation revealed that a suspect, identified as Kelton Spann, struck the victim in the head with a pistol, then shot at her as she tried to flee. Spann fled the area before police arrived.

Detectives took over the case, obtained surveillance video from the store, and recovered evidence from a cell phone dropped by Spann as he was fleeing. Arrest warrants were obtained, and a search warrant of his residence was obtained and executed on Nov. 29. Spann was not there, but a number of firearms were recovered from the residence, including two that had been reported stolen. As Spann is a convicted felon, more arrest warrants were obtained.

On Tuesday, the Violent Crimes Task Force, who had been searching for Spann, received information that he was back at his residence in the 1900 block of Dewitt Place. Another search warrant was obtained for his residence.

As Task Force officers, along with detectives and criminal patrol officers, got out at the residence, Spann fled out the back of the residence. After a short foot pursuit, Spann surrendered without further incident and was arrested.

The case will be forwarded to District Attorney Warren Montgomery’s office for prosecution. Spann has seven prior arrests by the BPD for a variety of charges, including felony weapons and narcotics violations.