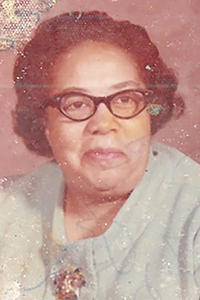 “I have fought the good fight, I have finished the course, I have kept the faith: Henceforth there is laid up for me a crown of righteousness, Which the lord, the righteous judge, shall give me at that day” (II Timothy 4:7-8).

Regina attended Washington Parish High School and completed her education at Southern University, where she obtained her degree in Education. She taught at several schools in the Washington Parish School System and later retired.

She was preceded in death by her father and mother, Will J. and Nettie Roberts; two sisters, Willie J. Roberts and Dora Richards; two brothers, Hollis Roberts and Frank Roberts; and two great-great-grandchildren.

Visitation will be held on Wednesday, Dec. 29, from 10 a.m. until 11 a.m., followed by the funeral service at Crain and Sons Funeral Home in Franklinton.

Crain and Sons Funeral Home in Franklinton is in charge of arrangements. Sign the guestbook online at www.crainandsons.com.