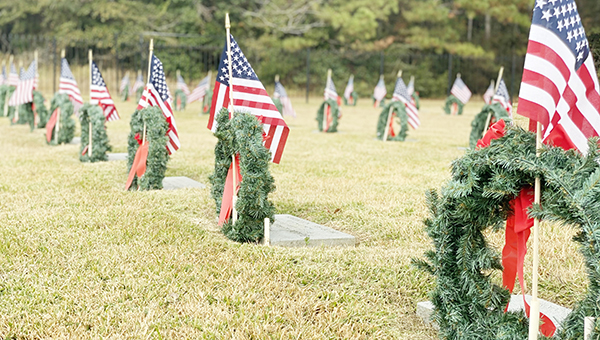 The Ponemah Wreath Society of 40 & 8 Voiture 1360 Bogalusa is again sponsoring Christmas wreaths in the veterans’ plots of the Ponemah Cemetery, in memory of our deceased veterans at Christmas.

Ever since the doughboys came home and landed in New York harbor in 1919, and marched gloriously down Fifth Avenue, the 40 & 8 and the American Legion have taken pride in sponsoring events with the laughter and soldiers’ songs that everyone loved, with echoes of times of victory in the Free World.

The Christmas Wreaths program allows all of us, whether veterans, civilians, soldiers or sailors, factory workers, farmers, or simply loyal Americans, to join in a more silent but equally meaningful salute, and a remembrance appropriate to the Christmas season. For the last several years, the 40 & 8, with Post 24’s cooperation, has sponsored this event and we once more are inviting everyone to take part. It involves the placing of a Christmas wreath, accompanied by a small flag, on each of the graves in the veterans’ plot in Ponemah Cemetery.

As of this writing, there are 350 of these graves. The project is not inexpensive, for each of these placings costs the 40 & 8 a total of $20 each, including wreath, flag and flag holder. The group will provide the 350 wreaths somehow, but its resources are limited, and it will help tremendously if individual Bogalusa citizens will sponsor a wreath honoring a family member or a friend, or the Unknown Soldier or the armed services as a whole.

The wreaths are also available at the same $20 price for those who may wish privately to honor a military veteran in a family cemetery or any other place of rest.

If anyone has a few dollars to spare, gift contributions are very welcome and needed, but whether able to purchase a wreath or contribute or not, the 40 & 8 invites and urges everyone to attend the ceremony.

The dark silhouettes showing a uniformed rifleman kneeling at a grave that were used at the Memorial Day service prompted many words of appreciation, and some say that it alone communicates the same message. More of those silhouettes are also now available.

These symbolic wreaths and silhouettes will be available outside the Bogalusa Walmart on Saturday, Dec. 4. At 9 a.m. on Thursday, Dec. 16, the day before the service, the 40 & 8 will assemble a work detail at the veterans’ plot at Ponemah to place the wreaths among those graves. While steadfastly faithful to the community’s needs, the 40 & 8 members are no longer in the first crisp of youth and will be very happy to have help from any volunteers whose schedules might allow them to join us at that time.

The service will take place at 10 a.m. on Friday, Dec. 17, at Ponemah Cemetery, and the 40 & 8 is happy that the Franklinton High School ROTC unit will be joining them this year, and that Bogalusa High School’s unit will also be taking an active part. Sgt. Rogers, “an old soldier and a good one,” will post the colors and retrieve them.

Please remember that it is never the purpose of the 40 & 8 or of the American Legion to celebrate war, although when one has been involved in it, one is not likely to forget it.

We are remembering and appreciating those who had the courage to carry our flag instead of dishonoring it, and we recall as well the wives and parents who received the dreaded telegram. And while we’re at it, we are hoping that during our remaining time on this earth we may again see our country enjoy the strength and unity that sustained us during those long years when freedom’s future was at stake.

In his first two years in office, the Treasury returned more unclaimed property checks than any other year on record, and saved the state millions of dollars by renegotiating contracts and forcing departments to restructure their borrowing habits.

Schroder is a U.S. Army veteran and served 10 years in the Louisiana House of Representatives. He is a graduate of East Jefferson High School and Southeastern Louisiana University. Above all, he is a husband of 36 years, father of two and an extremely proud grandfather to two grandchildren with another grandchild on the way.