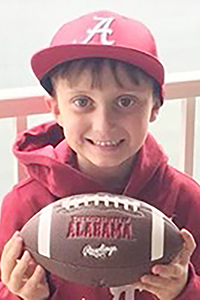 Kolton Tate Fairley, 7, departed this world on Nov. 16, 2021, at Children’s Hospital in New Orleans. Tate was born Jan. 16, 2014, coming into this world in what can only be described as “Tater style.” Raised in Poplarville, Miss., Tate attended school at Poplarville Lower Elementary.

Even at his young age, Tate was always the life of the party, a prankster, and never met a stranger. He was a true competitor in all of his endeavors. Tate had the answer for everything; if he didn’t know the answer off the top of his head, you could count on hearing, “Hey, Alexa.”

Quite the entertainer, there wasn’t a song on the radio that Tate couldn’t sing, and very loudly at that. He was a comedian, refusing to let anyone around him be sad. You could always count on Tate to cheer you up by making crazy faces or doing a silly dance. He would do anything you asked him to (sometimes for a small fee) and loved a good ketchup sandwich!

Tate excelled in sports, especially baseball. He loved the game! He was a superstar both on and off the field. Without a doubt, Tate is now playing on the greatest baseball team ever assembled with many legends of the game. When it came to football, he would root for Green Bay and could never resist pulling against LSU. Tate touted himself as his older brother Riley’s biggest fan, and always cheered for the Poplarville Hornets.

A sweet, sweet soul, Tate had an undeniable love for all in his life. With both the most infectious laugh and the brightest smile, Tate was his Mom’s right hand, partner in crime, and best friend.

He is also survived by grandparents, including Michael and Anita Davis, Larry and Debbie Clement, Ricky Dale and Lasharon Crain, and Lisa Crain; and his great grandmothers, Edna Nobles and Dorothy Hines. Tate also leaves behind a host of aunts, uncles, cousins, teammates and friends.

Visitors will be welcomed to celebrate Tate’s life Saturday, Nov. 20, from 5 p.m. until 9 p.m, and again on Sunday, Nov. 21, from noon until time for the services at 2 p.m. at Westside Emmanuel Baptist Church, 1143 W. Ninth St. in Bogalusa, with the Rev. Kirk Hoelzel and the Rev. Marcus Rosa officiating. Interment will follow at Crossroads Pentecostal Church Cemetery. Pallbearers will be Tad Fitzgerald, Ed Branton, Michael Davis, Randy Lafontaine, Jamie Walker and Chris Lott.

“You never said I’m leaving, you never said goodbye. You were gone before we knew it, and only God knew why. A million times we needed you, a million times we cried. If love alone could have saved you, you never would have died. In life we loved you dearly, in death we love you still. In our hearts you hold a place that no one could ever fill. It broke our hearts to lose you, but you didn’t go alone. For part of us went with you, the day God took you home.”