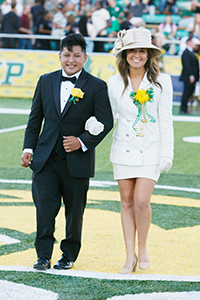 Annabella Seal is shown with her escort at the Southeastern Louisiana University homecoming.

Seal is a native of Bogalusa and is a senior majoring in Communication Sciences and Disorders.

She is a member of Alpha Omicron Pi Sorority, where she serves as chapter president, and was the recipient of the Pearl Award. She is also a former Panhellenic delegate and is a member of the Baptist Collegiate Ministries.

She has also been named to the president’s list.

After completing her undergraduate degree, she intends to attend graduate school and attain a master’s degree in Speech Pathology.

Seal is a graduate of Ben’s Ford Christian School and attends First Baptist Church of Bogalusa.

She is the daughter of Ryan and Tonia Seal of Bogalusa and Randy and Jeri-Lynn Herring Ponthieux of Abita Springs.