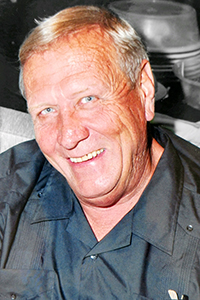 Rusty was born on Dec. 22, 1946 in Bogalusa, to Hascal Smith and Maybelle Walters. Following graduation from Bogalusa High School in 1965, Rusty served in the U.S. Air Force from February of 1966 to February of 1972. While stationed in Turkey, Rusty hosted a talk radio show naming him the “Cajun Cowboy” by the troops. During his service, he received the National Defense Service Medal, as well as the Small Arms Expert Marksmanship Ribbon. Rusty stayed connected to his brothers and sisters-in-arms by being a lifelong member of the Veteran’s Association. After leaving the service, he earned a technical degree in HVAC from Sullivan Vocational Technical School. He carried on to own his own restaurant known as Wishbone Grill in Kerrville, Texas, and two different catering services known as 10/20 Catering and Cross Creek Catering. He catered for films such as Everybody’s All-American and Gunsmoke.

Rusty had a sweet smile and loved to laugh. He was a friend to person and animal alike. He will be missed greatly by all who knew him.

Rusty was preceded in death by his Mother and Father; along with his sister, Elaine Copeman; and brothers, John Wayne Smith and Ricky Smith.

Graveside services will be held on Wednesday, Oct. 27, at 11 a.m. at First Baptist Church of Henleyfield, Miss., located at 4941 Highway 43 North in Carriere, Miss. Services will be officiated by the Rev. Larry Lassley and the Veterans Administration.