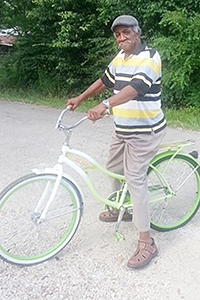 Mr. Elbert “Head” Brumfield was born on Aug. 31, 1942, to Tess Green and Maggie Hutchinson Brumfield in Bogalusa and departed this life on Oct. 16, 2021, at the Tulane University Hospital in New Orleans.

Elbert “Head” Brumfield was a lifelong resident of Bogalusa. His trade was masonry … yes, he built and crossed many bridges in his lifetime.

He was a true character in life, whether it be an offbeat tune, a loved nickname, or a ride in a bicycle basket, his memories are here to stay.

Elbert Brumfield enjoyed God, life, family, friends and most of all laughter; his caring and compassion are shown here today.

He leaves to cherish his memories: a son, Albert Elbert Brumfield; a daughter, Diedre Barnes, both of Milwaukee, Wis.; a brother, J.W. (Uncle Datron) Brumfield of Houston, Texas; sisters-in-law, Mae Catherine Martin of Bogalusa, and Catherine Brumfield of Houma; and a host of nieces, nephews, other relatives and friends.

A special acknowledgement to Audrey Steen, his niece and caregiver at the time of his passing.

The funeral service will be held on Saturday, Oct. 23, at 2 p.m. at the Cook-Richmond Funeral Home. Visitation will begin at noon and continue until the time of the service. The Rev. Christopher Matthews will be officiating, and interment will be in Ponemah Cemetery.