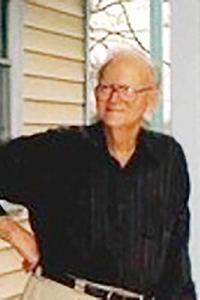 At the age of 95, Marion Cecil Wheat, of the Crossroads community in Mississippi, passed away Wednesday, Oct. 13, 2021, at the Pearl River County Hospital in Poplarville, Miss.

Cecil, as he was widely known, was a local house painter/contractor for many years before going to work and retiring from Pearl River Community College in Poplarville. He was the oldest surviving member of Bethel Baptist Church in the Crossroads community.

He was preceded in death by his first wife and mother of their two children, Alma Rice Wheat; his eldest son, Stanley Wheat, who passed away this past March; his second wife, Vera Polk Wheat; his parents, Albert and Louella Wheat; two brothers; four sisters; and his best friend and “running buddy,” Newell Bush.

A Celebration of Life service will be held at 11 a.m. on Friday, Oct. 22, at Bethel Baptist Church in the Crossroads Community, with the Rev. Billy Kent Smith officiating and assisted by a special friend, Daniel Smith. The burial will be private.

Any memorial contributions in Cecil’s honor can be made to the Bethel Baptist Church Cemetery Fund.

Poole-Ritchie Funeral Home has been entrusted with the arrangements.