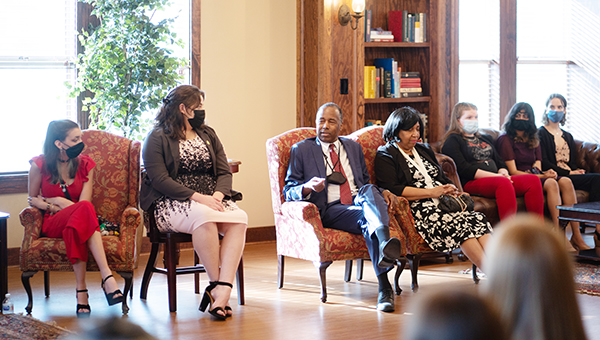 Dr. Ben Carson is joined by his wife, Candy Carson, for a “Meet and Greet” with Pearl River Community College students.

Current students in the Dr. William Lewis Honors Institute as well as hundreds of members of the public gathered on the Pearl River Community College campus in Poplarville, Miss., on Tuesday, Oct. 5, to hear world-renowned neurosurgeon Dr. Ben Carson speak. Carson also served as the U.S. Secretary of Housing and Urban Development under President Donald Trump, and was a candidate for president in the Republican Party primary in 2016.

The students were given the opportunity for a more intimate setting inside White Hall ahead of the public presentation at PRCC’s Brownstone Center for the Arts.

In the late afternoon, Carson had a special meeting with students in the Honors Institute. This more intimate setting allowed for the students to ask questions both in the group and then with a one-on-one meeting time. His wife, Candy, joined him for the trip to PRCC.

“The amazing success achieved by a hard-working person from meager beginnings inspired students to consider how their academic aspirations may produce positive results for families, communities, and possibly governments.”

Many of the student questions surrounded medicine, both for those considering a career in that field and those curious about both his past groundbreaking surgeries and where he sees medicine going in the future.

“It is amazing to look at advancements in the last few decades,” Carson said. “Neurosurgery today is completely different than when I entered the field. People watched shows like The Six Million Dollar Man and The Bionic Woman with bionic implants. Now we are seeing advancement like this.”

One question asked his favorite reading selections, both in the medical field and classic literature. This opened the door for Carson to discuss the impact reading had on his life. Carson recounted the path from reading for his own interest to that of learning across subjects. Beyond gaining knowledge and becoming a better student, Carson realized that he could use reading to “help him rise above the poverty he hated.”

With a nod to Dr. Martin Luther King, Jr., Carson reminded students that people have the capacity to think and analyze in a way that animals do not. That ability to reason is how we can judge on the content of character instead of a physical distinction like the color of a person’s skin.

Freshman student and Carriere, Miss., native Hannah Smith was appreciative of the experience.

“Having the opportunity to talk one on one with Dr. Ben Carson has to be one of the most rewarding parts of being in the Honors Institute,” she said. “Listening to him talk about his life experiences within such a small group is a once in a lifetime opportunity that I am so grateful to have experienced.”

Grant Holladay, a freshman from Kiln, Miss., reflected on the experience and its impact on him.

“To meet someone who persevered despite hardship sets an example to us that conscientiousness and an aptitude to succeed goes a long way,” Holladay said. “What stood out to me was his kindness when he told me ‘I think you’ll do great things.’”

As Carson walked onto the stage to speak to the public later that night, an enthusiastic crowd gave him a standing ovation.

His talk wove together tidbits from his life with his personal vision of living one’s best life — not just for the individual, but for the country.

He mentioned now commonly familiar stories of events became turning points in his life. Carson realized that through reading he could learn and that he was not a “dummy” as his fifth-grade classmates often taunted. He also had an epiphany as a teen that his temper and outbursts as a youth could land him in reform school, jail or the grave.

Carson struck a chord with the audience when he said, “When God changes your heart, He doesn’t do a paint job. He fixes it for good.”

Along with his weaving of faith and its impact upon his career, Carson also encouraged attendees to “THINK BIG” as a reminder of how to live a life that can have a positive impact on the community. Talent, Honesty, Insight, Nice, Knowledge, Books, In-depth Learning and God are the key reminders that comprise the acronym.