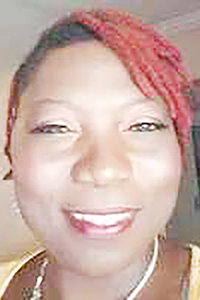 Twyla Evette Jefferson Taylor was born Oct. 10, 1976, to the proud parents of Joseph and Diane Jefferson Jr. in Bogalusa. She attended Harry’s Chapel United Methodist Church, where she was involved in all church activities. At an early age, she was a member of the children’s choir, young adult and the chancellor choir. Also at an early age, she took piano lessons under the direction of Mr. Willie E. Ginn and Mrs. Juanita Magee.

Twyla was a devoted daughter, mother and wife. She was the first child in a family of two girls, with her only sister Keely Etton McKelphin, her best friend.

Twyla was a quite humble child who also kept a smile. Everyone who knew her will remember her by her beautiful smile.

One of the things Twyla enjoyed doing the most was reading. Twyla graduated from Bogalusa High School in 1994 with honors. She attended PRCC and later went to work with the Washington Parish Sheriff Department.

Twyla’s world revolved around her son, Zay’lin Taylor — the joy of her life. She was a dynamic mother. She was married to Robbie Ray Taylor of 24 years.

The Lord called Twyla Evette Jefferson Taylor home on Oct. 5, 2021. She leaves to remember: her parents, Joseph and Diane Jefferson; one sister, Keely Jefferson McKelphin; and a host of family and friends.

A drive-through viewing will be held Monday, Oct. 11, from 4 p.m. until 6 p.m. at Crain and Sons Funeral Home in Bogalusa.

A graveside service will be on Tuesday, Oct. 12, at 11 a.m. at Duffy Memorial Cemetery with the Rev. Nolan Robinson, pastor, officiating. Crain and Sons Funeral Home of Bogalusa is in charge of arrangements. Sign the guestbook online at www.crainandsons.com.